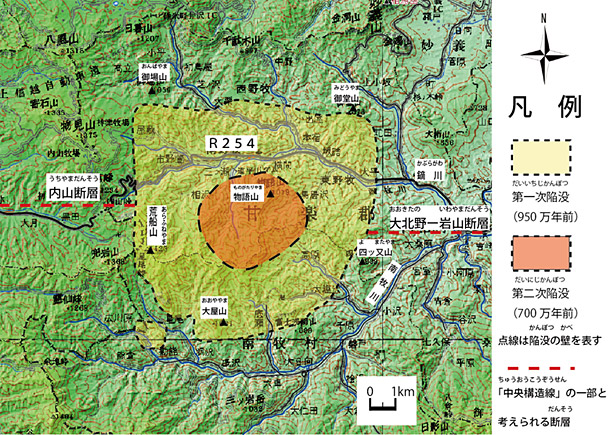 In the region surrounding Motojuku, an area as big as 10 kilometers in diameter collapsed and formed a basin-shaped caldera 9.5 million years ago (shown in yellow in the diagram). Further volcanic eruption filled up the basin with ejecta. Another large-scale volcanic explosion triggered the second collapse 7 million years ago.

The volcanic activity in this region ended about 6 million years ago and started happening in the northeast in Myogi.

Many mountains in Japan such as Mount Fuji and Mount Asama have spread their foundation by continuous eruption. When mountains have been inactive for tens or hundreds of thousands of years, as in the case of Mount Myogi, they continuously change their shape through erosion. Such phenomenon contributed to the oddly shaped rocks (some even resembling an old couple, called “Jii and baa”) and scenic beauty seen in the vicinity of Mount Myogi.

The flat mountain top can be seen among the steep mountains surrounding it. Mount Arafune (“turbulent ship”) derives its name from the fact that it looks like a ship floating on rough waters.
It is believed that the top of the mountain is flat because of the Arafune lava that flowed on top due to the volcanic activity 7 million years ago. The hiking path provides information on the details of the eruption.

Ashonen Falls is a beautiful waterfall with a height of about 12 meters. The steep cliff resulting from the difference in hardness compared to other rocks created such an impressive waterfall. A large-scale volcanic activity deposited a thick layer of hot volcanic ash on top and the heat caused the layer below to harden.

On the top of the mountain in the area called Saimoku, there are several enormous rocks that resemble statues. There are actually a couple of rocks that are named “Jii and Baa” as they look like the faces of grandparents. These oddly shaped rocks are the result of long-time weathering of the volcanic materials.

Mount Myogi is known as one of Japan’s three most noted places of rugged beauty. Along with Mount Akagi and Mount Haruna, it is also one of the three mountains of Jomo (which is an old name for Gunma Prefecture). Its perpendicular cliff appears in the foothills of surrounding mountains. The mountain surface is irregular due to the weathering of volcanic deposits of 6 million years ago. Mount Myogi provides a scenic beauty all year round, especially during the spring with cherry blossoms and during the fall with foliage.

Mount Myogi provides a mystical view created by nature as seen in Taiho Rock and Candle Rock. The most popular among them are the four stone gates that vary in sizes with the biggest one being 20 meters in diameter. It is still a mystery to this day how they were formed.
The path up to the stone gates is well paved and provides a great hiking course even for beginners. Maybe you can figure out how the stone gates came into existence if you look closely while you enjoy your walk.