Activity of the Median Tectonic Line

(Japanese islands while the median tectonic line was active) 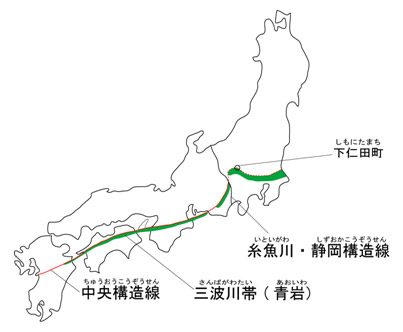 A big fault line runs east and west through the central part of the town, contributing to the huge difference in the geological structure in the north and south. The south side is characterized by the klippe that lies on top of layers formed by rocks of Aoiwa Park and chert deposits. The north side, on the other hand, features an area of a few kilometers heavily covered by rocks of various time periods and composition. The red line that divides the north and the south is the fault system that runs east and west through Japan and is called the median tectonic line.

Shimonita layer is the stratum right north of the median tectonic line and was formed in the shallow ocean 20 million years ago. In addition to clams and univalve shells, crab claws have been found from the layer.

There is an old bridge called Onigasawa Bridge along the mountain path close to Tomioka. This bridge is preserved to show the old route of the former Ueno Train Line. There are big rocks found in the stratum nearby, some exceeding one meter long. These unusual rocks are also called zure-reki and are believed to be caused by the activity of the median tectonic line.

This is a stratum formed in the ocean of 16.5 million years ago. The waters were relatively warm. This area has been famous for its fossils and those of Lepidocyclina, large planktonic species that dwell in temperate climate, have been found in the past.
There is a field of fukujuso (Adonis ramosa) flowers that bloom to announce the arrival of spring along with red ume blossoms.

The layers here were formed by sand and mud that alternately deposited on the bottom of the shallow ocean 16.5 million years ago. In addition to fossils of shells, shark teeth and corals have been found in the area. There are holes and tracks that indicate the presence of various marine life in the past when the area was under water.